It’s winter in Buenos Aires. Except it’s not really. Yes we had three days where the temperature dropped to nearly zero. I used to laugh at the whining Argies in their polar outfits, claiming they were about to die. Now after four years here I have lost all resistance to climatic adversity, so I cry along with them.

Thank god it was only three days though, because this weekend involved a lot of parties and a several of them were held outside. While no Englishman would plan such a thing in the depths of winter, they are a bunch of optimists here. And obviously Papa Francis had got on the hotline and said hey, how can I explain the purgatory thing is only metaphorical if you keep punishing us with this diabolical cold? Basta! Turn the heat back on!! And so it warmed…. delightfully.

So despite Guantanamo style sleep deprivation, we were up again with the larks. Well around 2 pm actually, still in time for a nice shower and a walk to a suitable brunching spot. And it was sunny outside with that crisp cool seaside air that puts you in mind of crisp, cool, white wine and a bit of fish….or maybe a lot of fish? After all we’d danced off a billion calories at least.

As readers may know, my go to place for fish is the estimable Chipper, the only place in Buenos Aires where you can get crunchy battered, moist fish with all the trimmings and order seven desks, ten wardrobes, 7 bedheads and 14 bedside tables, to be delivered within six weeks please with a side order of pickled eggs. Actually, possibly the only place in the world you can do this!

But we walked a little vigorously, overshot the cross street and ended up approaching Chipper from the other side, which meant we had to pass La Pescadorita, situated a mere 50 yards away, on what now may reasonably be described as Fish Corner (Humbolt and Costa Rica). And we saw people eating a range of fishy delights and the corner was still bathed in sun and a chardonnay was definitely going to taste better drunk outside, so while we felt a little guilty communing with the competition, we rapidly rationalised it as entirely supportive market research and bagged ourselves a table.

If I seem a little effusive about encounters with piscine comestibles, it”s because it’s easier to arrange a Mormon marriage with Paraguayan triplets here, than find someone that can source a decent fish and then not destroy it in the cooking process. Other than the aforementioned, only Marcelo’s, Crizia and Damblee have ever tickled my fancy. However, one of my favourite food writers, Dan Perlman ( http://www.saltshaker.net/), had recently given LP a thumbs up for their seafood parrillada. I’m happy to report, strictly in terms of disciplined market research you understand  (I will never go there again unless heavily disguised), that La Pescadorita delivered in spades.

A light, fresh Rutini Chardonnay, fit the bill. 2012, 9 months in French oak, not overpowering, well priced at 150 pesos. Just what we wanted (and you will notice from the photo that I don’t look too bad for a man that has partied for 30 hours out of the last 50???).

And while Dan had commented on the abundance of the parrillada, he’d eaten alone. We went for a little starter of chipirones, though we were so hungry we forgot to photograph them until they were nearly gone.

Did I mention it was winter? And 4 pm? And still sunny? Like this… 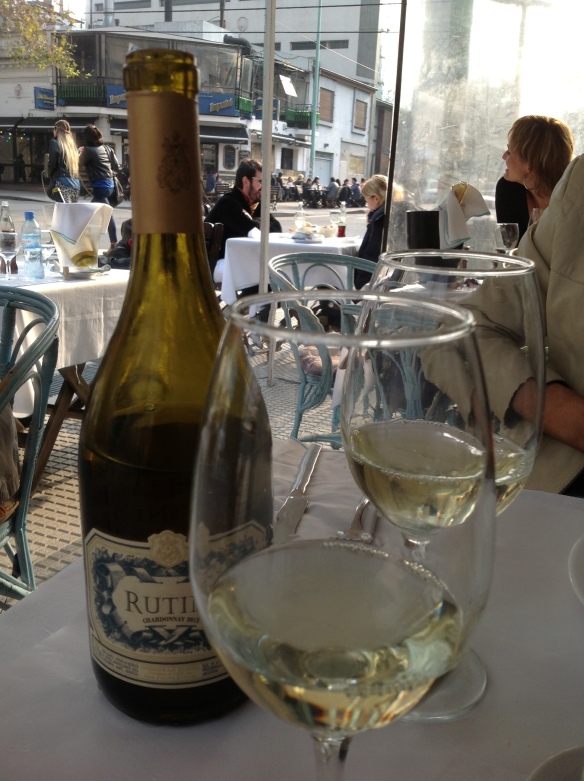 And so to the parrillada. Highlights were the abundance of juicy prawns, a perfectly cooked salmon fillet blasted with heat from below (crispy skinned, soft juicy flesh), more mini chipirones with tiny crunchy tentacles, a fat octopus tentacle (luscious) and a variety of fish fillets and scallops. More than enough for two for 240 peso and well seasoned with a variety of strongly flavoured sauces. We regretted having the starter as we failed to finish.

Obviously we were feeling pretty content after such an admirable spread, so I popped over to Chipper to invite the guys over to share a little liquid desert of coffee and Amaretto. LD staff remained charming even though the place was officially closed, when we asked for another.

Conclusion? If you are looking for for marine sustenance, pop down to fish corner. All your needs will be catered for there, though when I asked my LD waitress whether she could knock up a bookcase for me, she looked a bit blank. Some people still don’t understand customer service.

Boca, obvio, an Englishman would feel silly mispronouncing “Reeever” at the top of his voice. It’s like Thames or “Taaames”. The Stones were from London, we drank in the same pubs and I spent a very unsuccessful few days in re-hab light (read expensive health farm) with Ronnie Woods, drinking smuggled-in Vodka from Evian bottles, though at least he got drunk enough to invite me to play guitar with him and paid for Reiki healing sessions to deal with my hangovers. I’ve never been to Liverpool where I’m informed the Beatles came from. Van Morrison could sing in tune and being Irish could have definitely out-drunk Bob Dylan, both important criteria for judging rockstars. I am sure you will accept the above as conclusive arguments.

Malbec or Pinot Noir is more complicated. Malbec is the Argentine national wine as far as reds are concerned. Here it’s more a case of Boca versus Putney Girls’ School under 14’s, the Stones versus Justin Bieber, Van Morrison versus…well probably Justin Bieber again. Malbec is the robust, fully bodied, manly, all Argentine, smoky as your steak, future of the New World.  Pinot just the damp girls blouse that no one will remember in a few years.

Of course, the French wouldn’t agree. Any good Burgundian will tell you of the complexity of growing Pinot, a delicate, thin skinned grape, and of producing a classic, single varietal Grand Cru that is “clearly” the best in the world. The winemakers of Bordeaux are no more than grape mixing, wine blending chemists, they will explain, who are even allowed to add Malbec to their evil brew. And the food is better in Burgundy, so point proved and the Burgundy versus Bordeaux quarrel finally resolved! It amazes me how these powerful arguments often seem to align with my personal preferences. Better still, given the current pace of developments in Argentina, the Pinot versus virtually-any-varietal-or-blend battle, may be won yet again.

While for some time Rutini have been producing Pinot vintages that rival some of the meatiest of Bourgogne (try the 2006 if you are feeling flush), they come with an equally meaty price tag. However Pinot has suddenly sprung up everywhere. This temperamental grape must grow like a weed here. From Mendoza to Patagonia, oaked or un-oaked, aged or otherwise. Sometime in the last decade the collective consciousness of Argentine Oenologists must have succumbed to a vision. Pinot is the future, go out and spread your seed or at least your baby vines. And the results are impressive, not only offering some of the best but also the best value wines in Argentina.

To be clear about my prejudices, I find Malbec a very difficult grape to love. It seems to soak up the abundant Argentine sun too greedily. It takes a very fine winemaker to modify its sweet aftertaste. While the venerable Nigel at http://www.facebook.com/0800Vino introduced me to the wonders of high altitude, totally un-oaked 100% Malbec, made by the most characterful family of winemakers (you will have to consult him for the name, I have forgotten), it was 100% for export and out of my price range anyway. Pinot fulfils most of my needs, whether light, young and chilled on a hot day or ripe, oaked and matured with a rich dinner. For the cheapest plonk I chill down a 22 peso of the Trapiche Varietal. Nothing impressive enough to describe but you couldn’t drink a Malbec of that price…and be able to see the next day. A simple restaurant lunch at Campo Bravo always calls for Navarro Correas Colección Privada (about 55 pesos in the shops) chilled lightly, one of the best value Pinots in Argentina. Incredibly well made.

So Friday night we tried a Trumpeter and a much cheaper (55 pesos – £5.00) Trapiche, Colección Roble 2007, side by side. And the Trapiche far outshone its Ruttini owning peer. Mendoza, red fruit and creamy rhubarb, smooth finish and lasting balanced aftertaste, 12 months in oak.

Memories of Burgundy at the same price you could have seen the Rolling Stones in the Crawdaddy Club in Richmond in 1962 (inflation adjusted). Or at a price you couldn’t buy it in Burgundy. At a price you couldn’t even see Justin Bieber! Even if you didn’t want too!!! Even if they drafted him into the earphones at Guantanomo, they would probably have to pay more than that in royalties!

But I am mixing my metaphors, confusing myself. If Justin Bieber is the upstart, non-serious, outsider of the Argentine wine world, a bit of fluff, a light confusion, then I want to see him at 60, having overcome his addictions, having spent 5 years in prison, aged and raddled but mature and mellifluous…playing acoustic.

Luckily I don’t have to wait that long for my Pinot.