Wandering back from a marvellous fish lunch in Palermo, I came across this attached to a bus stop. Proof positive that you dont need the services of a pair of wife strangling brothers (Ok, only one has been photographed recently strangling his wife, strangely enough outside my favourite fish restaurant, but the other is definitely guilty by association), to get you political message across. 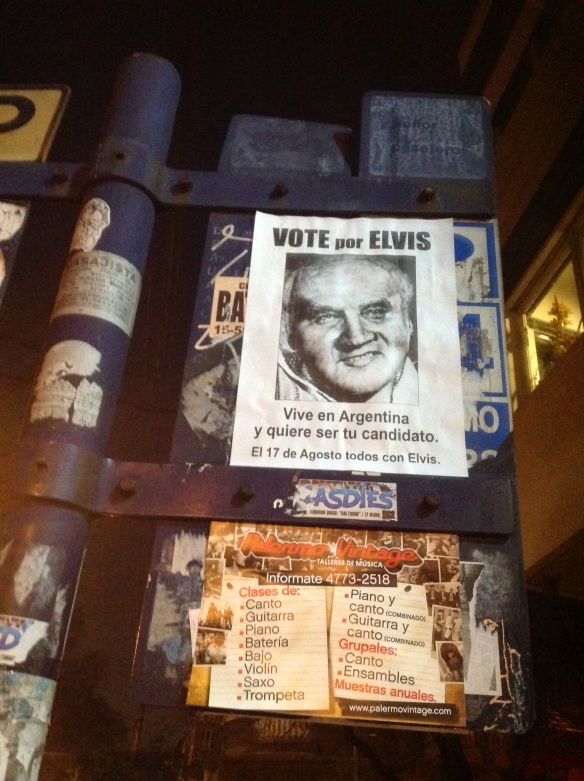 “Vote for Elvis. He lives in Argentina and he wants to be your candidate. 17th of August we are all for Elvis”. Short, simple and to the point. Communication at its purest. I’d vote for him if I had a vote.

Of course if he had employed a nose-tweaking Saatchi, the poster would have included a lengthy and convoluted explanation of what he had been up to since “Elvis has left the building”. Image preservation, historical reinterpretation, all the tricks of the trade. But this is Argentina. You don’t need that stuff. No one would be surprised if he turned up here (after all it’s probably more fun than heaven). We would just assume he’d had enough of being a global superstar and chose the country of self reinvention to assume a happier identity. Now he is obviously ready to do his civic duty.

And we won’t hold it against him that he is almost certainly an illegal immigrant. Most of us are. It’s not as though he’s been idle and dependant on state handouts. As the picture shows he is busy teaching singing and a range of instruments. And obviously he is flexible (far left of photo). If the teaching work gets a bit slack it appears he’s happy to give you a nice massage.