Today didn’t start well. Waking up with a bit of a hangover, I was immediately presented with the realisation that I am gay. You may reasonably ask whether this was inspired by some experimental activity undertaken in a dark corner of the smart party in Recoleta we attended last night, or by a sudden flash of attraction that I felt for some dark Argentine boy across the dinner table at the delicious (albeit vegetarian) dinner we went to prior to that. But no, it has nothing to do with sex and everything to do with interior design. My first waking thoughts were about ceiling lights. I’m getting obsessed with colours and glass. When I should have been thinking about greeting the new day and La Doctora with a manly awakening, I was actually contemplating the best way to restore my Vitreaux! Further, I am boring the pants off everyone with talk of vibrant colour palettes and having to seek out the company of gay men, as they are better at pretending to be interested.

What to do? As La Doctora’s head emerged into the chilly air above the duvet, I decided to come out immediately. She looked a bit for confused for a moment, mulling over the predicament. In Argentina you can turn virtually any noun into a profession by adding the suffix –ISTA.

“What you are in danger of becoming my dear, with your new Murano mania, is a Lamparista.”

Sounds painful, but even I knew she was trying to fool a naïve Englishman. You can’t turn a light (lampara) into a profession. La Doctora handed me a business card from the nice man at the flea market who had relieved me of thousands of pesos for one of the aforementioned. Sergio, Mercado de Pulgas, Lamparista! Well at least he’s out of the closet and happy with it.

“Are you ready to go shoppin’?,” La Doctora asked me sympathetically. And liberated by my confession, I was, eager to jump back on the horse of pendants and appliques, sconces and standing lights.

But then Jesus got in contact, a quick call to say bye-for-now and during the course of the conversation I realised I was starving. The problem with vegetarian food is that it digests too quickly. You wake up in the morning feeling like you haven’t eaten for a week. It may even have been the insufficiency of red meat that had led to my self-doubt and rapidly to-be-forgotten gay phase. I explained to Jesus that his packing and paperwork could wait, as could my lamparas, and that chorizos, morcillas, bloody steaks and pinot noir were the order of the day. If God is as easily persuaded as Jesus, there may yet be a place for me in Heaven. We arranged to meet at Minga, my favourite winter parilla, in 30 minutes. It is entirely coincidental that Minga’s staff are 100% gay and lesbian as far as I can tell.

Marching orders received, La Doctora turned on the radio. According to the DJ it was cold outside, meaning possibly less than 10 degrees C. Anyone who has lived here for a little while, will understand that Argentina has a completely different and far more dangerous, form of cold to anywhere else in the world. Firstly, the cold always comes with an Ola Polar (Polar Wave). This kills you (Te mata!) explained the DJ. “Si te Maaaata”, agreed her colleague. Then of course there is the effect of the humidity that on a hot day can add lots of degrees to the temperature (last Christmas night was apparently 45 degrees, or 55 according to some DJ’s) or on a cold day subtract them. “Te moris” (you die), explained the DJ. “Obvio, te moriiiiis,” agreed her colleague.

“Estar abrigado,” means to be well wrapped up. “Estar re abrigado,” means very well. I’m a canny Englishman. I’m not going to let this lethal Argentine brand of cold catch me off guard and kill me, literally, obvio! I left the house re-contra-mil-putas abrigado. I will leave that to your imagination but suffice to say that with my boina (beret), layering and scarfs, I could have survived a sneaky ice age that surfed in on a polar wave. Outside the door it was bright sunshine, blues sky, and about 12 degrees. Spring to us English or actually most of summer. A bead of sweat formed under my boina before I had got to the corner.

Luckily we were running late so took the car. If I had had to walk, I would have lost more weight than Franckie Dettori in a 5 hour sauna, while wearing a wetsuit and sticking charlie up his nose. And guess what, it was Un Dia Peronista. This term, literally a Peronist Day, is used with and without irony depending on the political views of the person using it, to describe a perfect day. It involves crisp sunshine, lack of wind (no maldito ola polar which kills you), no humidity to confuse the temperature (remember, you die). We get to the restaurant. The tables are full outside. We get the last table on the upstairs terrace. The sun’s still bright so we take off some layers.

A quick shout out (God I hate that expression, but it has snuck into my vocabulary, though I’m not even sure whether I use it correctly), for Minga (Costa Rica side of Plaza Armenia). While in the UK a minga is an ugly girl of uncertain cleanliness, our lesbian friends are smart, clean and efficient. The morcilla (crunchy exterior and creamy interior) is better than the chorizo. Steak, excellently juicy. Chips hand cut. Salad green, but I didn’t feel the need to taste it, having eaten vegetarian the night before. A pinot noir, Padrillos, very acceptable at 110 pesos. Coffee good and served with chocolate covered dulce de leche bombs. Service pleasant and attentive. What more could you want on the second day of winter, sitting on an (unheated – they have a smoker friendly heated terrace downstairs) terrace, soaking up red meat and sun?

Then kisses exchanged (yes you do a lot of kissing in Argentina but kissing a Mexican apparently does not make me gay), it was time for lamp shopping. Except it wasn’t, as on leaving the restaurant I heard a distinct riff emanating from the square.

“I suspect they won’t be playing blues,” says La Doctora.

“Ni importa, at least the guy can play guitar,” says I.

So Argentina’s got Talent. And what’s more it doesn’t wait to get selected for a TV show. No, it loads up its kit into a van, buys some petrol for the generator to drive the amplifiers, and sets out its stall in the plazalita. Obviously, it has practiced for at least 5 years before assailing the public with its renditions. Its timing is tight. It realises that to make interesting music you need at least six people in the band. And a guy doing the mixing, not too loud but crisp. And its out there playing, reliant on the approval of a random audience and the fact that small children will dance ecstatically in front of it.

So what would Simon Cowell have said? I suspect he might have mentioned that the lead guitarist (who had a real Santana onda), shouldn’t have worn the cardigan that his granny had knitted him. But then Simon doesn’t understand Argentine cold, so would almost certainly die here due to inappropriate clothing choices. Simon wouldn’t have liked the bongo player. Why? Too dark skinned, huge hands, an afro hairstyle, TOO stereotyped as a bongo player. But the guy played great bongos. Or the “indigenous” percussionist? Sitting on his beat box, shaking gourds, rubbing gourds, bashing the box. But he had the best voice of all of them. Would Simon have liked the authentically cheerful ambiance, the fact that all the musicians could actually play a wide range of proper instruments, the fact that there was nothing to manufacture, because these guys already know what they do for fun?

So we thought we would sit on the edge of the fountain and listen for a couple of tracks, but the band was better than that. Forget the shopping! Lighting will still be there tomorrow, the band, maybe not?

Mala Macumba (sort of bad magic) it’s called. Here is a link to their stuff. http://www.youtube.com/watch?v=ipetzX3uCEQ

Gracias chicos, sos capos! You are why I live here!!!!! 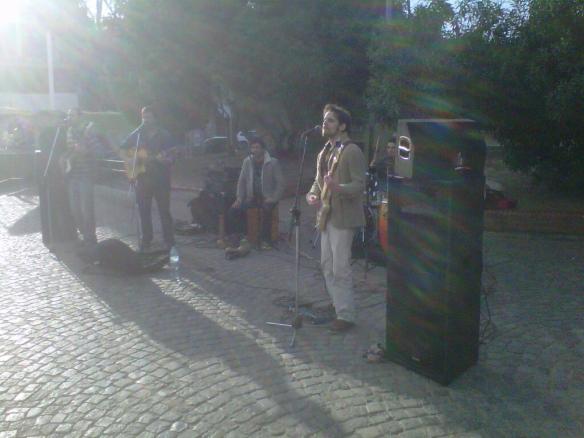